The EFF claims MP Marshall Dlamini’s apparent slapping of a police officer after Thursday evening’s State of the Nation Address (SONA) was in response to a right-wing threat against the life of their leader, Julius Malema.

This, after video footage of the slapping incident emerged on Friday morning. 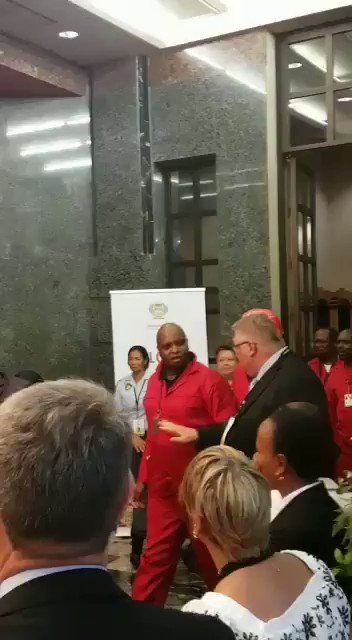 Come on, was it really necessary!? Wow hai okay. #EFF #SONA2019 utterly unnecessary, what kinda country will you turn this to be @EFFSouthAfrica if y’all are resorting to violence everytime a conversation gets heated. Show leadership not barbarism. Completely uncalled for.

“The EFF has received media enquiries regarding an assassination threat on the life of the CIC [commander-in-chief] Julius Malema, which had been planned to be executed during the 2019 State of the Nation Address yesterday,” read a statement by EFF spokesperson Mbuyiseni Ndlozi.

“The security threat implicates elite members of the police, who are in collaboration with right-wing groups to take the life of the CIC, in an attempt to undermine the advances on the expropriation of land without compensation discourse, that will soon be law.”

According to Ndlozi, the EFF was told that the Parliamentary Security Service, also known as “white shirts” or “bouncers”, have been infiltrated by these groups and targeted the occasion of the SONA to execute the “assassination”.

“The hope was that the EFF caucus would be kicked out of the house, using the parliamentary security [white shirts]. The anticipated evil acts would then be carried out during this moment of chaos. The EFF can confirm this and any further inquiries regarding this threat must be directed to the SAPS [SA Police Service] and the Minister of Police.

“Accordingly, when the CIC, Malema, and the EFF leadership were unreasonably stopped by these white shirts in Parliament, after the House had been adjourned, we all thought this was the moment and reacted with the necessary self-defence. The event of a white security man in black and white, being pushed and clapped [sic] in the face, followed him violently pulling the CIC Malema, from passing through the corridor doors of the National Assembly.”

Ndlozi said according to the Powers, Privileges, and Immunities of Members of Parliament Act, Section 7 (c), no one is allowed to obstruct MPs in the precinct of Parliament from going anywhere to do their work.

“It is illegal, and those who do security in the precinct should be well aware of these provisions.”

Despite the grave threat to his life, Malema bravely faced the media outside the National Assembly for interviews after the SONA.

“An initial report alleges that Warrant Officer Johan Carstens, responsible for cordoning off the exit area for the procession, faced sudden confrontation and was attacked by the EFF MP, resulting in facial injuries. Officer Carstens has opened an assault case with the police,” they said.

“The presiding officers are outraged and disappointed by this shameful conduct by the MP, who, as a public representative, is expected to display exemplary conduct to the rest of society – particularly during an important and decorous occasion such as the SONA,” reads the statement.

The presiding officers will await a full report on the matter in order to determine an appropriate course of action.

Malema was seen shortly after the address braving multiple interviews with various media outlets, including News24. He was all smiles along with his colleagues.

News24 will ask will police and Parliament whether a security threat was lodged.